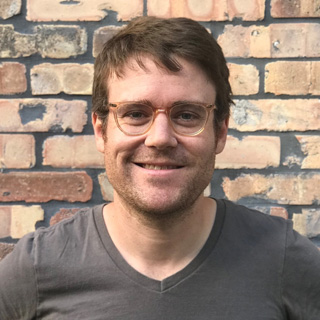 Advances in deep learning have driven tremendous progress in many industries, including autonomous driving, pharmaceutical research, and security. As deep learning models and datasets continue to grow at a pace that far exceeds the advances in computational hardware (Figure 1), distributed training functionality provided by tools like Horovod has become essential. Without the ability to train a single model with multiple GPUs at once, many modern deep learning models would take weeks to train with a single GPU!

Since being open-sourced in 2017, Horovod has continued to mature, recently graduating as an LF AI Foundation project and surpassing 10k stars on GitHub. After evaluating several distributed training tools, Determined AI chose Horovod as the foundation for the distributed training capabilities in our open-source deep learning training platform. Determined builds upon the high-performance distributed training offered by Horovod, while also providing state-of-the-art hyperparameter tuning, built-in experiment tracking, and smart scheduling and management of both on-premise and cloud GPUs.

Determined AI and the Horovod team have collaborated to improve Horovod’s performance by adding support for an optimization known as local gradient aggregation. In this post, we describe how this optimization works, present some benchmarks illustrating the performance gains it enables, and show how it can be used. Our changes to support local gradient aggregation are included in Horovod 0.21, which was released yesterday! 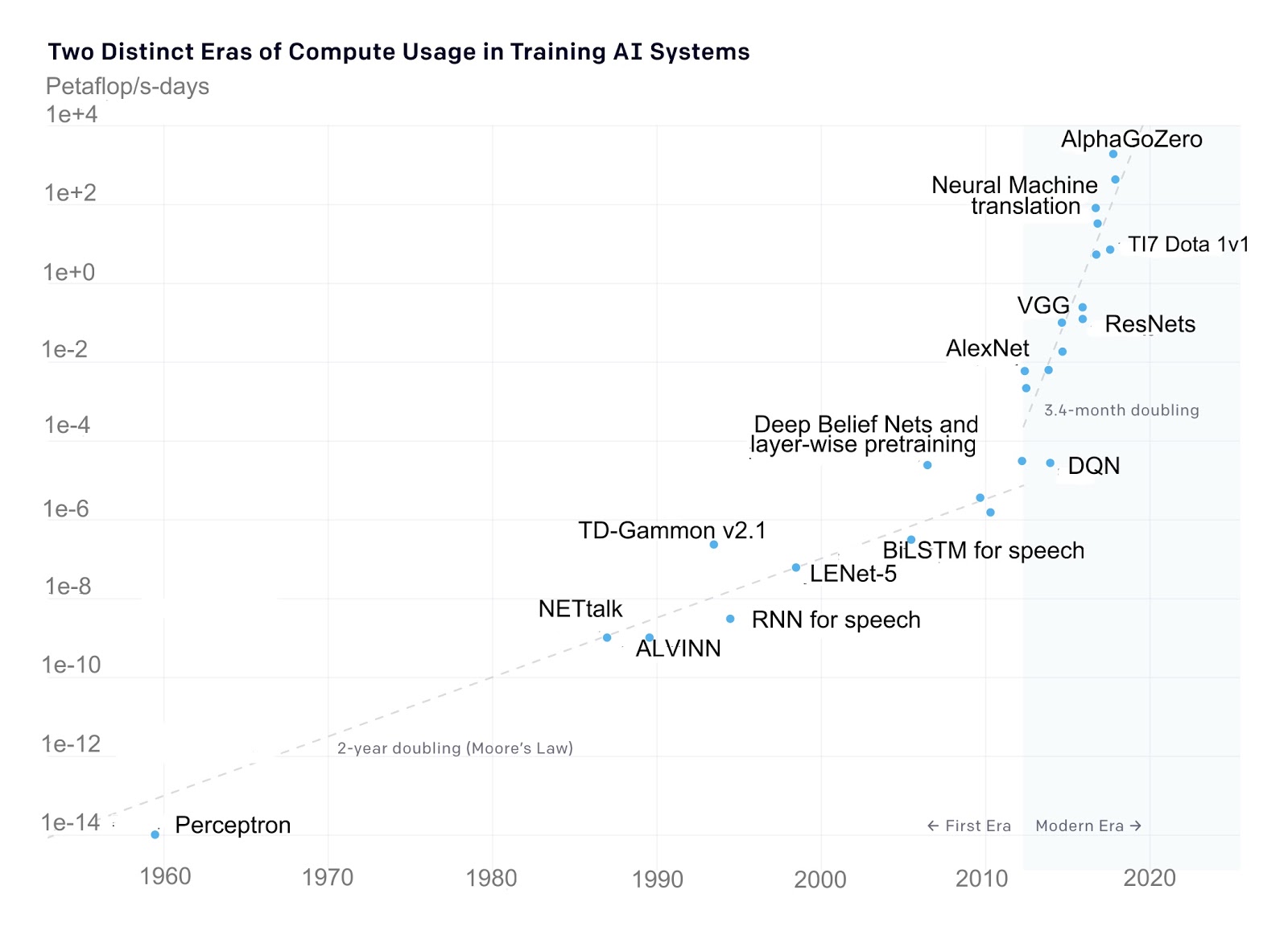 Figure 1 (Image from OpenAI): As deep learning continues to increase in popularity, so do the computational resources required to train deep learning models. Large new models such as AlphaGoZero require years of training time on a single machine. Distributed training tools such as Horovod, and optimizations such as local gradient aggregation, are the only way we can satisfy the computation demands of modern models.

Horovod uses bulk-synchronous data parallelism to implement distributed training. Data parallelism works by having each worker (e.g., a GPU) load an identical copy of the model so every worker has the same model parameters. After loading the weights, training is done by applying this loop over the training data:

Figure 2: By default synchronous data-parallelism will have every worker perform forward and backward pass, then before the worker can proceed to the next mini-batch there is a communication stall during which updates are communicated between workers.

As the size of the model and the number of workers are both increased, communication often becomes the bottleneck. How can the cost of communication be reduced?

Improving the network interconnect between workers is expensive and reducing model size often comes at the tradeoff of lower accuracy. Reducing communication frequency, by increasing the amount of computation that is done per unit of communication, is typically the best approach for lowering communication overhead.

Local gradient aggregation works by having each worker perform N mini-batches (on a unique partition of the mini-batches) of work between communicating updates, where N (the aggregation frequency) is configured by the user at the start of training. During every backward pass, each worker accumulates the updates locally in GPU memory by summing the latest updates with all of the previously accumulated updates on that worker since the last round of communication. Once all workers complete N mini-batches, the local accumulated updates are communicated between workers using AllReduce resulting in all workers seeing all the updates for the last N mini-batches. 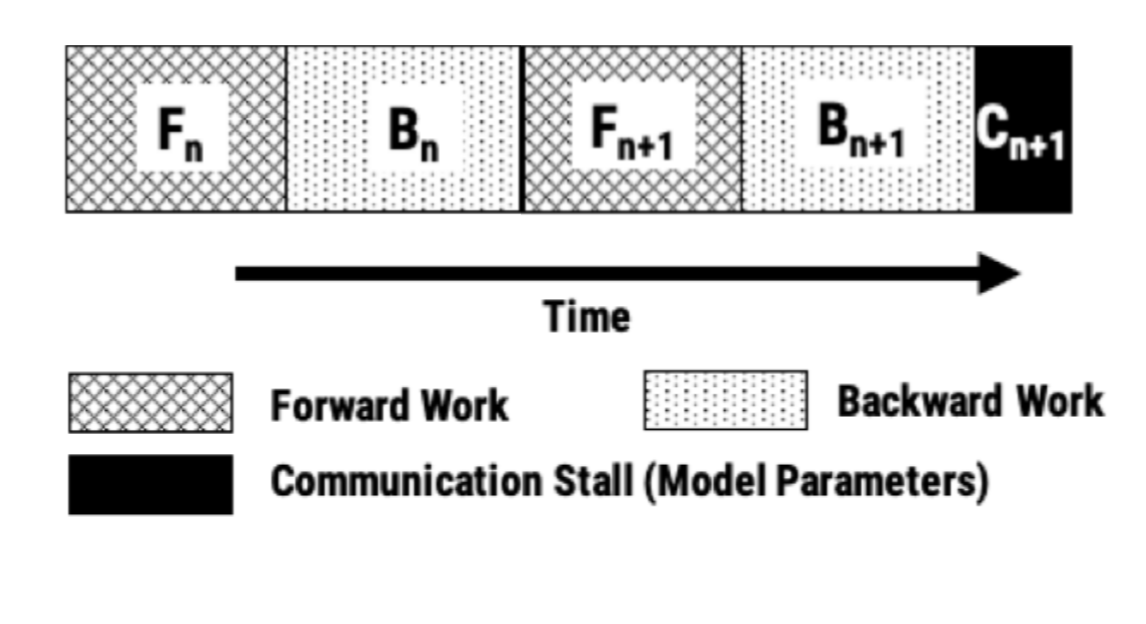 We measured the time to convergence for FasterRCNN, with and without gradient aggregation. For these benchmarks, we used a cluster of 4 and 8 machines; each machine was configured with 8 Nvidia V100 GPUs. All benchmarks use a per-GPU batch size of 1. The benchmark results are shown in Figure 4 below. Using local gradient aggregation (yellow and orange bars) significantly reduced communication overhead and shortened training time. All four configurations reached the same mAP accuracy after training for 9 epochs. 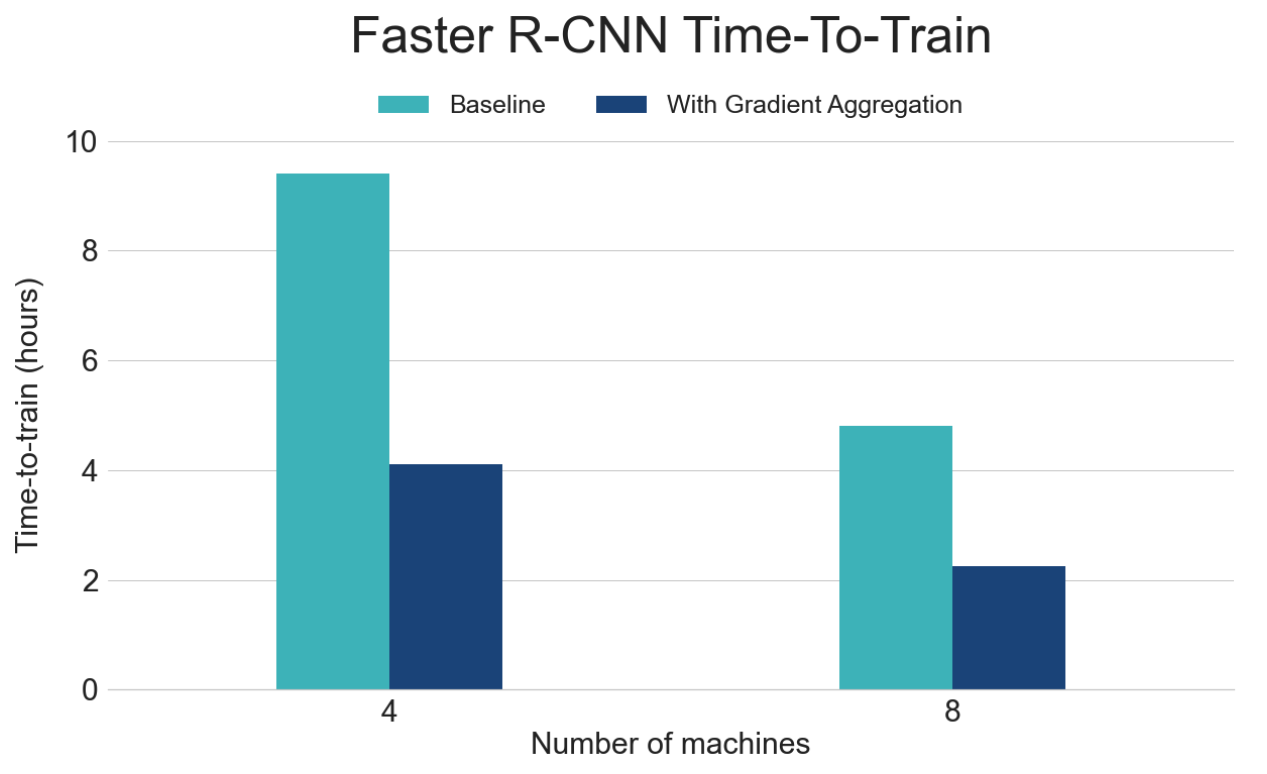 Enabling local gradient aggregation to speed up your training is as simple as changing one flag (available in version 0.21.0 or later). When using Horovod directly all you need to do is set backward_passes_per_step to the desired aggregation frequency when initializing the Horovod optimizer:

When using Determined, switching from single-GPU training to distributed training does not require changing your model code. Instead, users simply specify the number of GPUs they want a model to be trained with, and Determined takes care of provisioning GPU instances (if necessary), scheduling the appropriate number of containers, configuring Horovod, and orchestrating distributed training. For example, to train a simple CNN on the CIFAR-10 dataset for a single epoch of data using 16 GPUs, the following experiment configuration file can be used:

Determined makes distributed training easy! Running a distributed training job with Determined is as simple as setting a configuration parameter, as shown above: Determined takes care of provisioning the underlying hardware, scheduling the associated containers, and then uses Horovod to deliver state-of-the-art distributed training performance. Installing Determined only takes a few simple commands, and it works with both on-premise GPU clusters and in the cloud. To get started, check out the installation instructions and the quick-start guide. The Determined GitHub repo is the best place to see development activity; we’re also available to chat on Slack if you have any questions.

At Determined AI, we are excited to be a part of the Horovod community and hope that these optimizations allow users to continue to get better leverage on their computing resources. We believe Horovod will be a key build-blocking for scaling deep learning model development in the future.