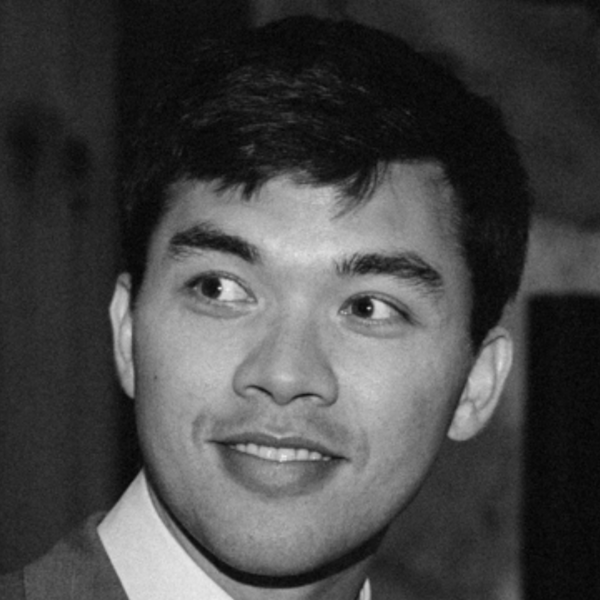 Stable Diffusion is the latest deep learning model to generate brilliant, eye-catching art based on simple input text. Built upon the ideas behind models such as DALL·E 2, Imagen, and LDM, Stable Diffusion is the first architecture in this class which is small enough to run on typical consumer-grade GPUs. In this blog post, we will:

Throughout the post we will also highlight various images created using the Determined AI Textual Inversion example repo, which implements the workflow described in detail below. 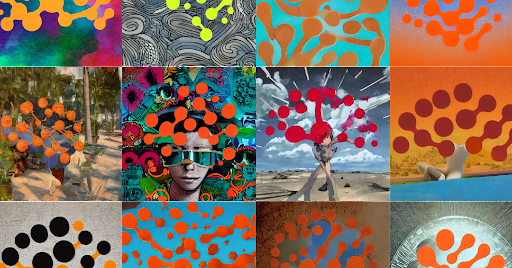 All diffusion models are trained with a single goal in mind: given a noisy image, attempt to remove the noise. More precisely, the training loop consists of two separate processes:

Sufficiently trained, such models are capable of creating recognizable, wholly computer-generated images by iteratively de-noising a white-noise seed. A sketch of this process is demonstrated in the figure below. In practice, one typically uses 1000 steps in the forward process, while various methods are used to drastically reduce the number needed for the reverse process; see the DDIM paper, for instance. For a code-based introduction to the fundamental diffusion-model training loop see The Annotated Diffusion Model, also by 🤗 Hugging Face. 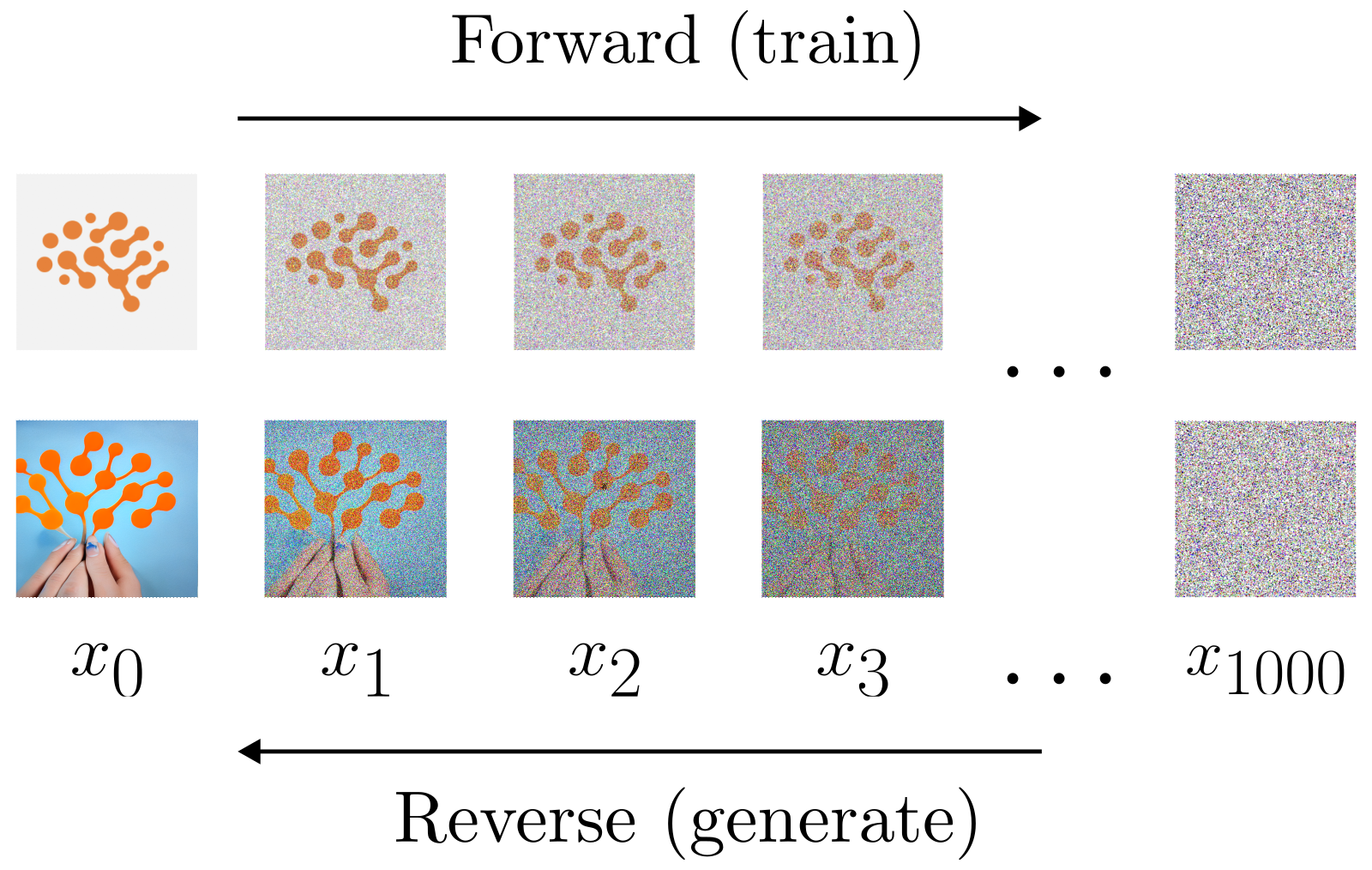 A visualization of the forward and reverse processes described above.

Early diffusion models generated images which were representative of the training set’s image distribution. This meant that if, for instance, the training set consisted of dog and cat images, then one would have no control over whether a dog or cat would be produced in the next batch. More recent architectures (such as Stable Diffusion) additionally consume a text description of the image, and such prompts are the user’s main handle for guiding model output.

The prompt vocabulary is fixed at training time and its static nature can be very limiting when a specific output is desired. However, an exciting, recent technique known as Textual Inversion demonstrated that one can add new concepts to the vocabulary, and then fine-tune them to correspond to very particular objects, as defined through additional images. 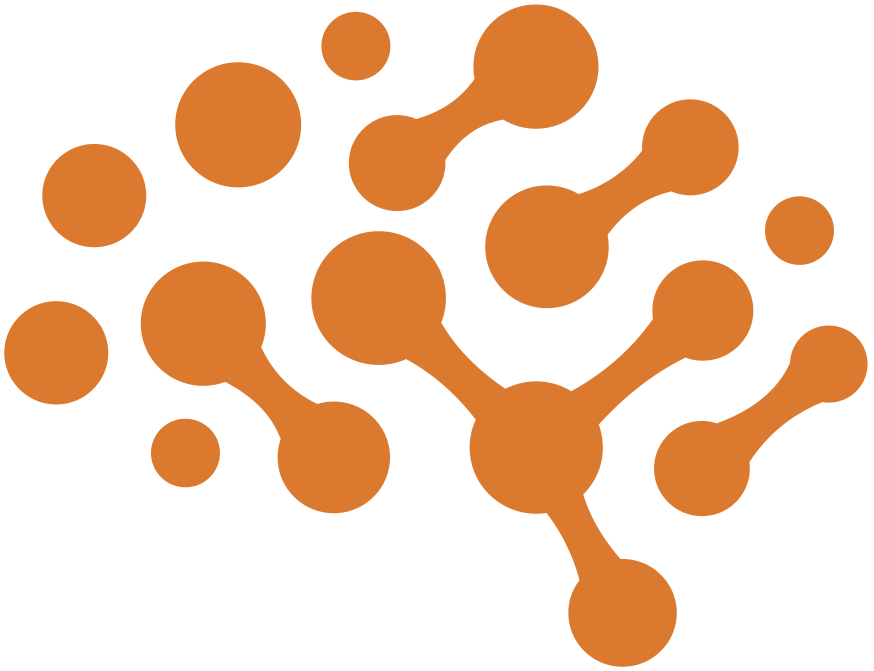 As an example, consider the Determined AI logo above. If we wanted to use Stable Diffusion to generate a watercolor painting featuring this particular logo, we might use something like:

However, it would be difficult to get exactly what we want, due to the imprecision of language. Instead, using Textual Inversion we can provide a set of images featuring our desired logo, add an entirely new concept into the vocabulary, and fine-tune on the images until their essence is distilled into the new concept.

As a concrete example, we will take det-logo to represent the Determined AI logo and initialize this token as being equivalent to the series of tokens brain logo, sharp lines, connected circles, concept art and then fine-tune the embedding-vector representation of this series until it sufficiently captures the essence of the logo. A comparison between the typical output for the above prompt using vanilla Stable Diffusion versus the output after using Textual Inversion can be found below, as well as a time-lapse of the early stages in the Textual Inversion training process. 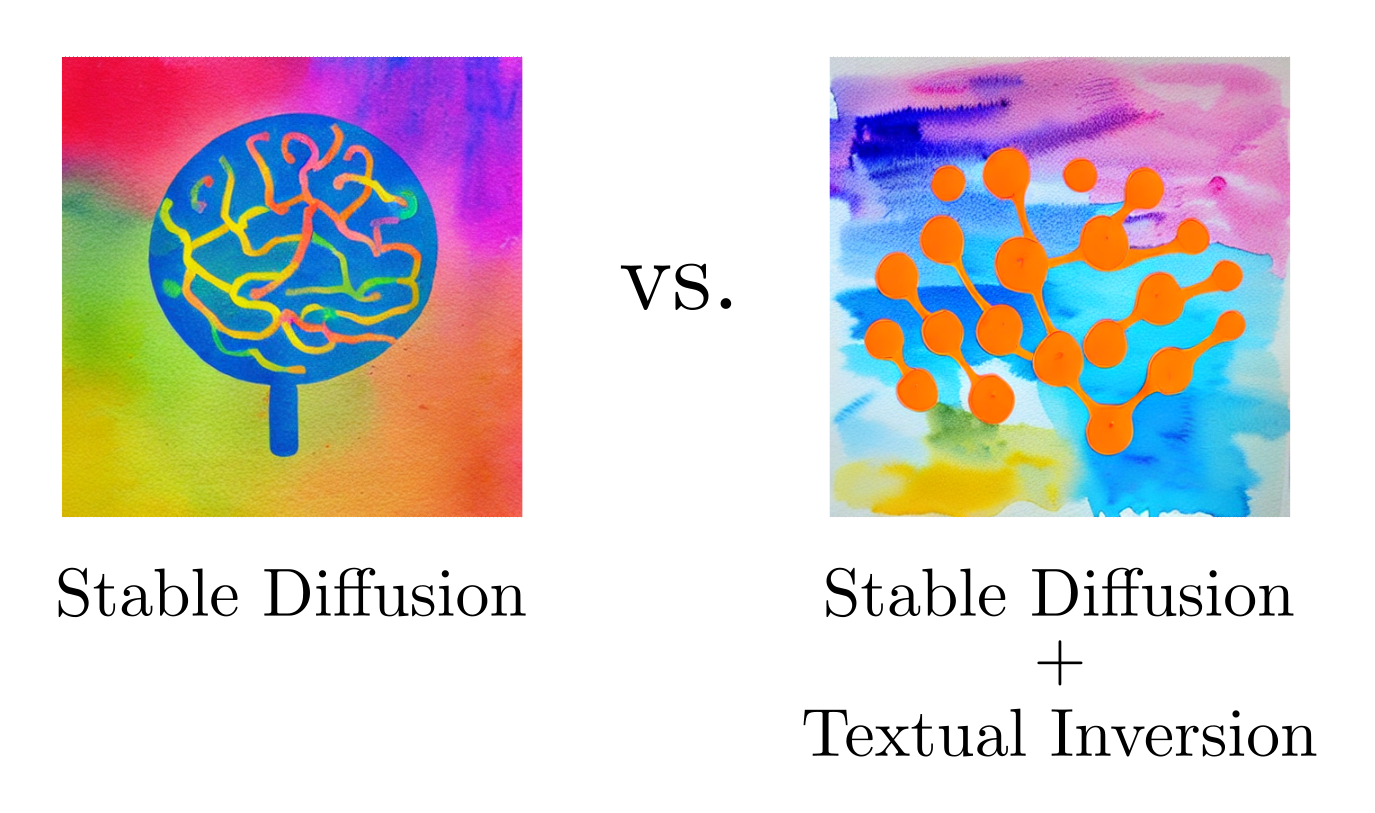 Left: a typical result for the above "a watercolor painting on ..." prompt when using Stable Diffusion out of the box. Right: a typical result after replacing the "brain logo, sharp lines, connected circles, concept art" sub-phrase with learned embeddings via Textual Inversion.

Progression of generated images for the "a watercolor painting on ..." prompt during the early stages of Textual Inversion training, as seen at varying numbers of gradient descent steps.

This Textual Inversion procedure is a featured example in the popular 🤗 Hugging Face’s 🧨 Diffusers library which provides an excellent entry-point into the world of diffusion models through a simple API. Below, we will demonstrate how Determined AI makes it easy to fine-tune Stable Diffusion and generate personalized art using the results at scale, utilizing distributed resources to boost the speed and quality of results relative to those attainable through notebook-based workflows. 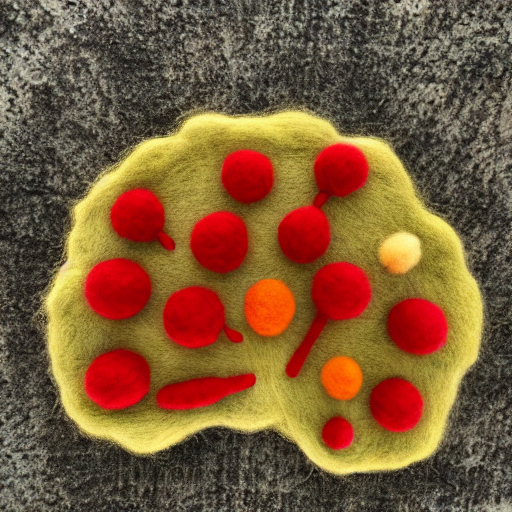 Before walking through the Textual Inversion process, let us first see what a well-tuned model can do. Using the interactive 🤗 Spaces demo below (built on top of gradio), one can generate art featuring the Determined AI logo by either choosing one of the example prompts or entering a custom prompt which includes the phrase det-logo. This demo, which is generously supported by a community GPU grant from 🤗 Hugging Face, uses weights which resulted from a hyperparameter search across many multi-GPU Trials, an easy-to-implement process with Determined AI.

Give it a try! And feel free to share any interesting images with us @GGDeterminedAI.

💡TIP: Play around with the advanced settings. For instance, lowering the guidance_scale will reduce the influence of the prompt on the output.

An explanation of the various entries:

We can fine-tune more than one concept at a time by simply appending the relevant information to each of the lists above.

The fine-tuning Experiment can be submitted like usual by navigating to the root of the repo and executing det e create finetune_const.yaml . via the command line (if you are new to Determined, see the Quickstart guide here). For an even simpler experience, only change the HF_AUTH_TOKEN field in the config and submit the Experiment without further changes; a ready-to-go fine-tuning Experiment using the Determined AI logo is set up in the repo by default.

The Experiment progresses with the features you would expect from Determined AI:

🤗Hugging Face’s 🚀 Accelerate library is used to handle various aspects of distributed training, such as ensuring that tensors are placed on the correct device. In the generation code discussed in the next section, we alternatively use Core API to handle many of the same tasks. 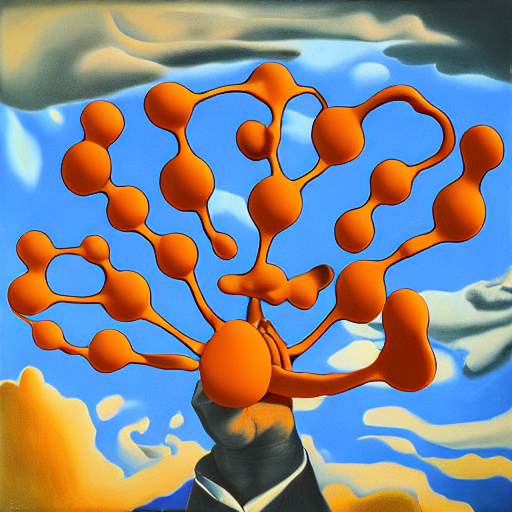 Once the fine-tuning Experiment completes, it is time to generate art with our newly-trained concept. There are two available methods: via Jupyter notebook or large-scale generation through a Determined Experiment. The former workflow is useful for quick and interactive experimentation, while the latter is useful for pure performance.

We start with the notebook workflow, which again only requires three steps:

Step 3 can be performed by executing the following command in the root of the repo:

The --context . argument loads the full contents of the repo into the JupyterLab instance, including the textual_inversion.ipynb repo itself and various supporting files. In particular, these include a demo concept stored in learned_embeddings_dict_demo.pt which was extensively trained on Determined AI logos and which can be used in lieu of (or in addition to) one specified by uuid.

After the above preparation, the textual_inversion.ipynb notebook can be run from top to bottom. Generated images will appear at the end of the notebook.

Finally, after promising prompts and parameter settings have been found via the notebook, images can be generated at scale by submitting a full-fledged Experiment. The generate_grid.yaml file loads in pretrained concepts by uuid or local path and controls the generation process by specifying the prompts and parameter settings to scan over. All generated images are logged to Tensorboard for easy access, as seen in the gif above. By default, simply executing det e create generate_grid.yaml . after inserting your authorization token (but without making any further changes) will submit a two-GPU Experiment which creates nearly 500 total images using the pre-trained demo-concept included in the learned_embeddings_dict_demo.pt file.

Rather than using 🚀 Accelerate to handle the distributed aspects of the computation as in the fine-tuning code, the generation code uses Determined’s Core API to perform these tasks, such as cross-worker communication. Different tools are used in different parts the repo purely for demonstration purposes. 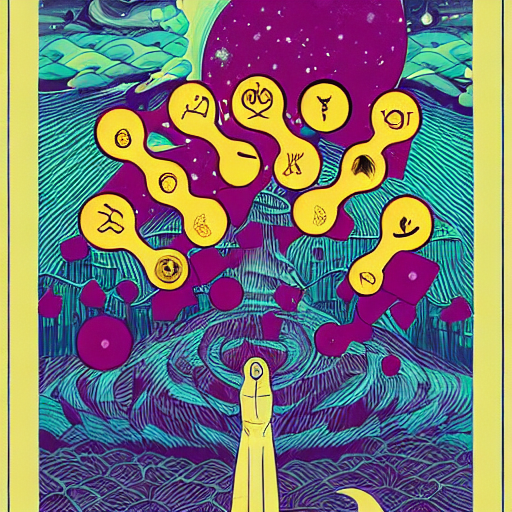 So, what exactly is the Textual Inversion training-loop doing?

Here, we answer this question by inspecting a sketch of the fine-tuning code, whose essential elements use 🧨 Diffusers for easy access to diffusion architectures. 🧨 Diffusers integrates seamlessly with Determined through Core API, which adds powerful checkpointing, metric tracking, hyperparameter search, and more.

Before reading the detailed description that follows, it may be helpful to see the digrammatic summary of the Textual Inversion training loop below. In a nutshell, an image (img_tensor) and a prompt which both describes the image and contains the new concept token (det-logo, here) are taken as inputs. After noise is added to a representation of the image, a neural network attempts to predict these corruptions and adjusts the new concept token’s embedding vectors to improve at this task.

The flow of the Textual Inversion training loop, with sample values shown for all variables. The inputs prompt, img_tensor, rand_timestep, and noise at the top are combined into the final loss on the right. The trainable embedding vectors which define the new concept appear in the first layer of the CLIPTextModel block.

A key aspect of Stable Diffusion is that the diffusive process does not actually add the noise to the image pixels directly. Instead, noising and de-noising occur entirely in latent space, a far smaller space to which the images are mapped. It is this compression which ultimately allows the model to be run on the types of GPUs which are available to the typical user.

Training images are transformed into latent space through a neural network, specifically a pre-trained Variational Autoencoder (VAE), AutoencoderKL. Given an un-noised image represented as a tensor img_tensor, the latent-space representation (latent) is constructed as in

The latent_dist.sample() suffix corresponds to the fact that VAEs are probabalistic models which generate an encoding by drawing a sample from a distribution. The code above, and in the following, is schematic; precise expressions can be found here.

We then create a noised version of the latent-space representation (noisy_latent) by generating the cumulative noise appropriate for a randomly-chosen step in the forward-process time-series and adding it to the above:

Here, train_scheduler is one of the many noise-schedulers available from 🧨 Diffusers which specifies the precise steps taken during the forward process.

Next, Textual Inversion attempts to predict the above noise from the noisy_latent and guidance from a prompt involving our newly-added concept. The prediction (noise_pred) is performed using the following elements:

The above description corresponds to the following (again, schematic) code:

In Textual Inversion we minimize this loss by adjusting the embedding vectors which represent our new concepts which have been added to the text_encoder above.

The code referenced above uses only vanilla PyTorch and 🧨 Diffusers (the latter also depending on 🤗 Transformers). 🚀 Accelerate and Core API come together only in the scaffolding of the training loop.. Core API is flexible enough to support whichever workflow you prefer. (For additional examples of how to use Core API, see this blog post.) 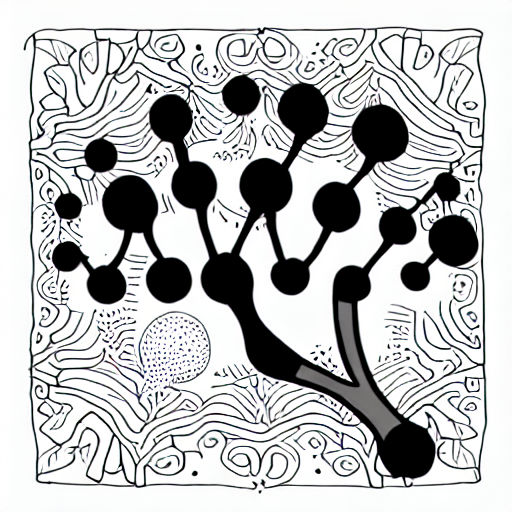 As with Stable Diffusion, a careful balancing act is often required to get satisfactory results from Textual Inversion. Some general tips:

More advanced tips and discussion can be found in the repo’s README.

An incredible number of resources for Stable Diffusion and Textual Inversion can be found elsewhere online, for instance via r/StableDiffusion or the official Stable Diffusion Discord Server (whose #community-research channel is particularly inventive and which inspired some of the tricks used in the repo).

We look forward to seeing the art you generate with Stable Diffusion and Determined, and to the creative ways you incorporate Core API into your workflow. To share examples with us, reach out to @GGDeterminedAI! And thank you once again to 🤗 Hugging Face for the community GPU grant which supports the interactive demo above.

If you’re just getting started with Determined, refer to our Documentation and visit our GitHub page. For support and to learn more, please join our Determined Slack Community – we’d love to hear from you!

If you enjoyed this blog post, we hosted a lunch-and-learn event a few weeks ago that displayed our Core API feature and more Stable Diffusion training on Determined! If you missed the session, you can check out the event replay on our YouTube channel and sign up for future Determined events on our Meetup page.